Hitachi Data Systems (HDS) announcement an agreement to acquire Pentaho in February of 2015. At this time, there is very little information available about HDS's plans for Pentaho, and we do not anticipate any information until after the deal has closed. We feel that given HDS's historical commitment to open source projects, that there will be little change to the open source nature of Pentaho.

Since our last review in 2012, Pentaho has added two additional distinct open source projects. Community Tools (CTools) delivers a wide range of extensions for the server platform including dashboarding. Sparkl is a project that allows developers to build new plugins to the Pentaho BI Suite.

Pentaho supports the Pentaho Marketplace which provides a place for developers to share their Pentaho plugins with Pentaho system administrators. This has allowed companies such as Meteorite BI to deploy their Saiku Analytics plugin (available in community and enterprise editions) to the Pentaho community.

Since our last look in 2012 the Pentaho Report Designer (PRD) has seen steady progress, although the progress has slowed compared with the period between 2010 - 2012. Jaspersoft Studio has made more significant advancements during this period, but PRD has had more changes than BIRT.

We found Pentaho to be the easiest to learn for creating basic listing reports and for grouped listing reports with aggregations. Its UI was not overly cluttered with sophisticated, less-commonly used functionality, and the tool was easy to learn and performed well. In short, the User Interface is attractive and functionality is sensibly laid out.

Pentaho’s stated goal is to provide a comprehensive solution for Data Integration and Business Analytics. This includes solutions for extract, transformation, and load (ETL), basic reporting, data analytics, data exploration, data visualization, and data mining. This broad company vision might explain why the reporting functionality is not as deep as BIRT or Jaspersoft. Functionality that report developers take for granted in BIRT and JasperReports – such as side-by-side report components, cross-tabs, and robust charting – are not as fully developed in Pentaho. Unfortunately this means when using only Pentaho reporting, it can be more difficult to create complex reports.

The Pentaho Report Designer (PRD) is a WYSIWIG tool that lets you create reports using a graphical user interface, as opposed to creating reports by directly creating and manipulating XML. These reports can then be run by the Classic Engine or the Pentaho BI Server.

In general, our impression is that the usability and stability of PRD continues to improve. We feel that for simple to moderate reports PRD's usability is at part for most tasks with Jaspersoft Studio and BIRT. 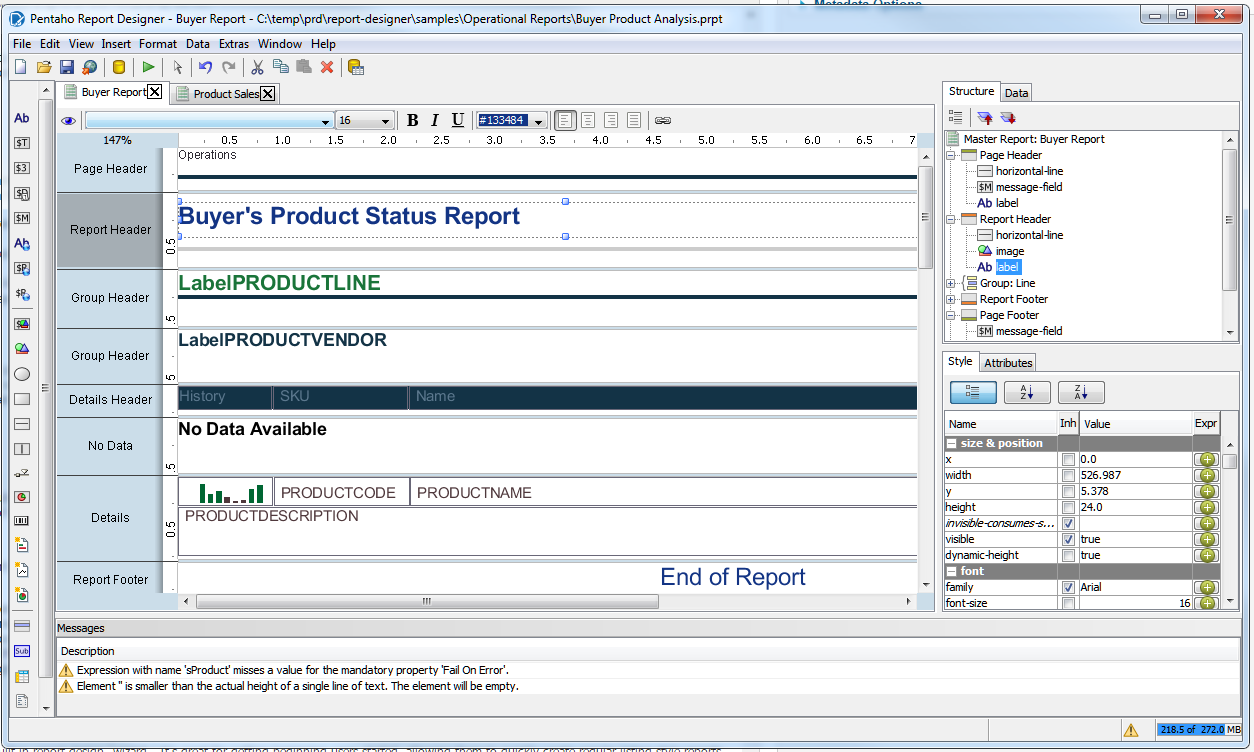 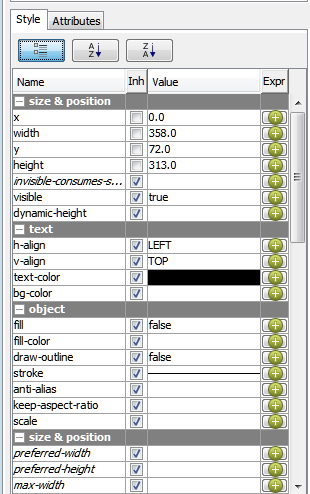 The Pentaho Report Designer is in the “pixel positioning” school of report design. Like Jasper (and unlike BIRT) users specify precisely where each report element is to be displayed. This gives users fine-grain control over the look of a report, but also limits the report’s ability to adapt to different-sized displays. For example, if you want a report to look good when printed on an 8.5”x11” sheet of paper, then the report will only be as wide as a sheet of paper even when displayed on a widescreen monitor with lots more horizontal screen real estate.

Like Jasper, Pentaho is very dependent on sub-reports. If you want to use multiple grouping sections, multiple data sources, have side-by-side report components, or re-use the results of a query within a different section of a report, you need to use sub-reports.

While sub-reports are great for re-using report pieces across many different reports, requiring sub-reports for the above use cases adds unnecessary difficulty and complexity to the report design process:

The Pentaho Report Designer has the best built-in report design “wizard.” It’s great for getting beginning users started, allowing them to quickly create regular listing-style reports with up to four levels of grouping, skipping the tedious work of manually placing and formatting each individual report control. (see screenshots) An important thing about this wizard is that it is re-entrant, you can make changes by pulling up the wizard again. 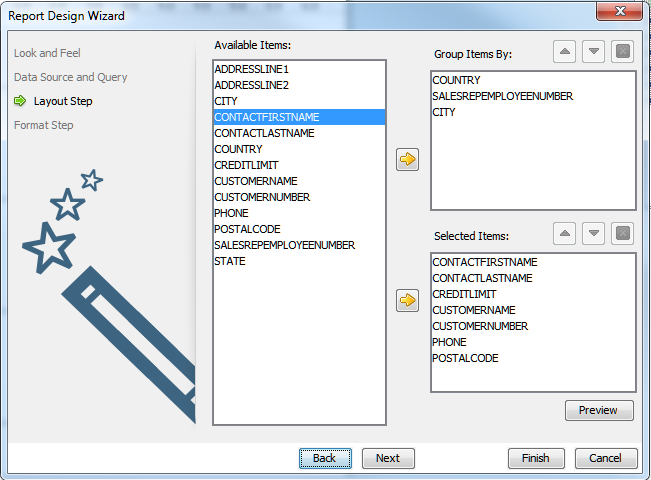 In Pentaho Report Designer, the process of creating a chart involves providing property values for a really large dialog box (see below screenshot). There is no wizard to take you through the process, unlike JasperReports or BIRT.  We find it interesting that Pentaho provides such an excellent report wizard but no charting wizard, and BIRT provides a great chart wizard but no report wizard. Jaspersoft Studio has middle-of-the road wizards for both reports and charts.

This is sufficient to create many types of charts, but does not offer as many levers to customize the report’s contents, look, and behavior as the other tools. Setting up the chart’s category, series, and values is difficult, as most of the time you cannot use pick-lists to choose the fields to use, and instead you have to type them into a pop-up window that doesn’t provide any guidance as to what you are supposed to type. Although the chart dialog seems to imply that you can just change the chart type by just clicking on the appropriate button along the top, when you do so you often lose the values you already typed in for category, series, etc. This can make it very frustrating to use.

Adding to the usability issues, there is no chart preview – you can’t see the results of what you created until you leave the Chart Dialog and actually run the report. 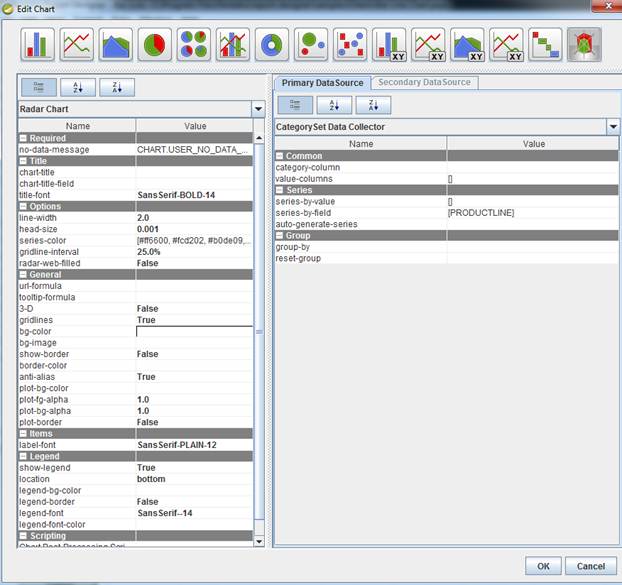 Below are some of the strengths and weaknesses of the Pentaho Report Designer, as compared to BIRT and Jaspersoft Studio report designers. Note that some of these strengths and weaknesses are really due to the behavior of the underlying Classic Engine, not the Pentaho Report Designer itself. However, we include them here because the report developer is most likely to encounter them.

Over the past five years, Pentaho has shown the consistent improvement in its open source reporting tool. We believe that Pentaho is an excellent choice for reports that are of simple to moderate complexity and don’t require crosstabs or charts. We still believe that BIRT and Jaspersoft are better for more complex reports. Pentaho might also be a good choice if printed reports are an important requirement.

One of the most compelling reasons to go with Pentaho, however, is how Pentaho Reporting integrates with the rest of the Pentaho BI Suite. While we do not cover these other Pentaho products in this write-up, they are worth a look if you have requirements around data mining, data integration, OLAP analysis, or just need a report server to deploy and run reports via a web-based user interface.

Pentaho is a registered trademark of Pentaho, Inc.