"2014 was an eventful year for Jaspersoft. We launched two new versions of our flagship product, JasperReports Server: v5.6 and v6, both full of clever innovations. We reached new records for total number of customers, product downloads, and registered community members. Oh yeah, and we were acquired by TIBCO Software at the end of April." 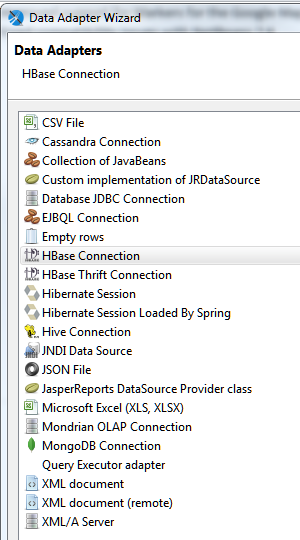 Jasper’s product suite is fairly broad (although not as broad as Pentaho) including reporting and data integration/ETL. The open-source community edition includes the following components for reporting:

JasperReports is the most popular and widely deployed open source reporting project in the world. It has been deployed in hundreds of thousands of production projects, and its reporting capabilities are built into thousands of software products. As such, Jaspersoft Studio (JSS) is a solid, full-featured tool, capable of creating and running the gamut of traditional “real-world” report designs, from simple to complex layouts. However, we feel that JSS is less usable than both the BIRT Designer and the Pentaho Report Designer. We find that many simple, common operations - such as creating aggregates – are more difficult in JSS than the other open source design tools.

Our fundamental issue with JasperReports has always been that Jasper seems to have taken paper reports as its starting point and worked to replicate them on the web. This complaint while mitigated in JSS, is still present. For instance, a common complaint with Jasper was the lack of a Table of Contents mechanism (TOC). JSS has addressed this through the Jasper book concept which uses Jasper's sub-report concept to build reports with a TOC. While this works, the workflow is relatively complex and requires a fair amount of effort to link the TOC to the hand built bookmarks in the other sub-reports. While effective, this approach is significantly more difficult than building a TOC in BIRT or Pentaho.

Despite this fundamental issue, we feel that JSS is a significant step forward addressing many of the issues that we found with iReport. All indications are that Jaspersoft will continue the progress towards a better report design tool with JSS.

JSS is a WYSIWIG tool based on the Eclipse 3.8.1 platform that lets you create reports using a graphical user interface, as opposed to creating reports programmatically using the Jasper Reports Library. These reports can then be run by the Jasper Report Engine or the JasperReports Server. JSS is available as both a stand-alone application or as an Eclipse update, available on the Eclipse Marketplace. Jaspersoft has done a nice job integrating JSS into the Eclipse framework, providing an interface that retains many of iReports best features, while leveraging the now ubiquitous Eclipse UI experience.

More importantly, JSS has added a number of well designed dialogs (Eclipse views) that allow a report developer to fine tune the properties of the controls within a report. Like BIRT, Jaspersoft's dialogs help guide report developers to the properties that they want to control. This is a significant improvement over Pentaho which lumps all of the properties for a control into a single grid structure. 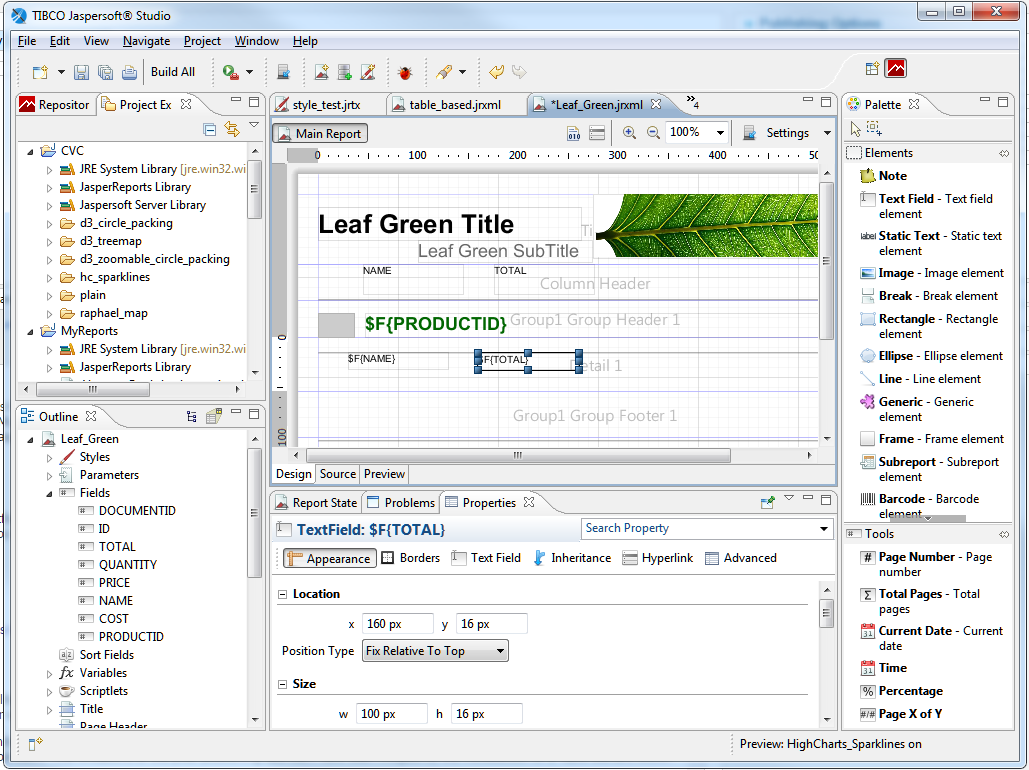 Figure 2 – Screenshot of the Jaspersoft Studio Interface. It has the typical designer components – the report design with a preview tab, and panels for the report outline/structure, the report element palette, and the improved property editor.

The JSS report designer is a solid tool that has seen steady refinement since its introduction in 2012 and is capable of producing fairly complex report designs. However, it can be difficult to use and the learning curve is steep. Much of this is due to Jasper’s underlying approaches to report design. Jasper, like Pentaho, is in the “pixel positioning” school of report design, where the report designer must explicitly place each control and field on the page and format them individually. This means drawing your own tables, handling borders and formatting for each cell individually instead of for the table as a whole. This makes things especially tedious if you want to add, delete, or reorder columns. “Pixel positioning” is very different than the BIRT’s approach, which is table and grid-oriented, much like how web pages and spreadsheets are usually developed. So with BIRT, there is a “table” element in the palette that makes it easier to create and format tables as a whole, and adding, deleting, or reordering columns is a snap.

Jasper’s emphasis on pagination and pixel-positioning gives report developers fine-grained control over the look report, but also limits the report’s ability to adapt to different-sized displays. So, for example, if you want a report to look good when printed on an 8.5”x11” sheet of paper, that the report will only be as wide as a sheet of paper even when displayed on a widescreen monitor with lots more horizontal screen real estate.

Also, like Pentaho, Jasper is very dependent on sub-reports. If you want to use multiple data sources, use a query’s result set more than once in a report, or have side-by-side report components, you need to use sub-reports. While sub-reports are great for re-using report pieces across many different reports, requiring sub-reports for the above use cases adds unnecessary difficulty and complexity to the report design process:

Unlike BIRT and Pentaho, Jasper requires that you compile reports prior to running them. This means that report developers must have the entire Java SDK installed. Compilation also adds an extra step to the process of deploying reports. Since the compiled Jasper report executables are Java byte-code, revision control is difficult since it is impossible to identify the differences between versions of a binary file.

JasperSoft excels at the way it can use Java objects (POJOs) as a source of data. While both BIRT and Pentaho have this functionality, Jasper seems to have the best interface that really encourages this type of data acquisition. This is particularly for cases where you have an application that has a Java data abstraction layer. Rather than query the underlying database, and having to recreate any business logic in the data abstraction layer, your app can simply pass the data to the JasperReports runtime.

On the other hand we are not big fans of the JSS SQL query editor. While the editor has had significant improvements since we last reviewed the product, it was still more difficult to use then either BIRT or Pentaho's query editors. Part of the issue seems to be that the JSS query editor has three interchangeable modes: Text, Outline and Diagram which all have their own modes of operation. We found it to be a bit clunky, although at the end of the day it is functional. Jaspersoft deserves kudos for trying to make them all work together (BIRT does not allow switching from Text to Graphical) but we hope that they spend another round of development on the editor to further improve it.

Jasper, like Pentaho, is in the “pixel positioning” school of report design, where the report designer must explicitly place each control and field on the page and format them individually. This approach is the foundation of JasperReports and JSS, and you can see evidence of this throughout the tool. The result is that the report author can precisely control how a report looks when printed out on standard-sized paper, and the output can be precisely formatted and unvaryingly consistent. For projects that require a lot of printed reports, JasperReports might turn out to be the best choice. However, note that Jaspersoft’s emphasis on printed output detracts from its ability to dynamically adapt reports to the size of the web browser window and make the most efficient use of screen real estate possible.

JasperReports, like Pentaho, is very dependent on sub-reports. If you want to use multiple data sources, use a query’s result set more than once in a report, or have side-by-side report components, you need to use sub-reports. While sub-reports are great for re-using report pieces across many different reports, requiring sub-reports for the above use cases adds unnecessary difficulty and complexity to the report design process:

JSS like Pentaho uses JFreeChart as the charting engine in the community product (the commercial product provides additional charting engines). Charts are built in JSS using a simple wizard. First, you pick the chart type from the big diagram below. 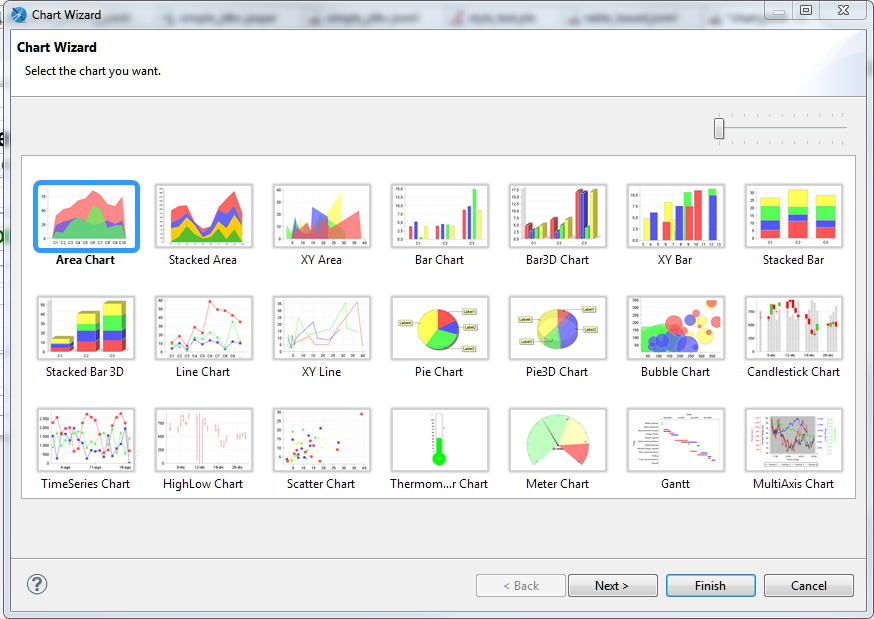 Figure 3 - To add a chart in JSS, you first select the type of chart.

The wizard then prompts you to 1) select a dataset, or sub-dataset, to populate the report, and 2) specify which data fields that identify the series displayed in the chart and which are to be the data values, and out pops a chart. You then use the property editor to change anything else about the chart, such as its formatting, size, hyperlinks on pie slices, order of series, etc. While most of the necessary options appear to be available in the chart’s property editor, this process is not as usable as it could be due to the number of properties available and limited visual feedback in design mode when a property value changes.

Selection of individual properties to create a uniform chart type would grow quite tedious for developers that are implementing a large number of charts. JSS provides two additional mechanisms that allow a user to modify the appearance of a chart. Themes allow a developer to set the value of multiple properties in a single file and the apply that theme to multiple charts. JSS has a theme editor that allows developers to configure a large number of properties and then see the result a large selection of sample reports. Themes expose even more properties than those exposed through the single chart property interface and provide a high level of control over the charts appearance.

In addition to Chart Themes, JFreeChart supports customization of the chart layout through a Chart Customizer interface. Chart customizers are quite powerful allowing developer to fully leverage the full JFreeChart library function. Developers wishing to exploit the Chart Customizer interface create a Java class that implements the JRChartCustomizer interface. The chart class must then be compiled and exposed to JSS and the runtime environment as a jar file. This process is well documented, but goes well beyond the skills or patience of many report developers. JRChartCustomizer Documentation. 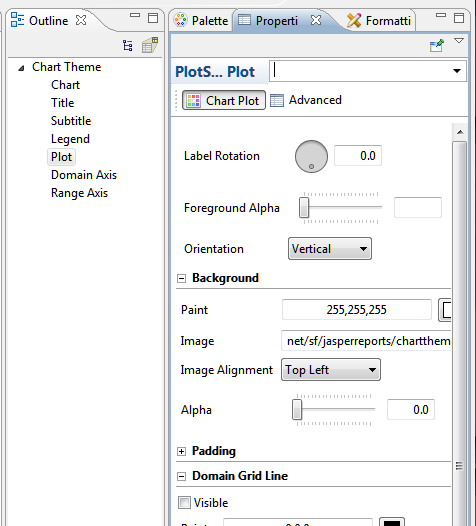 Finally, unlike BIRT and Pentaho, Jasper requires that you compile reports prior to running them. This means that report developers must have the entire Java SDK installed. Compilation also adds an extra step to the process of deploying reports.

Jaspersoft Studio is a solid open source reporting tool that has been used in hundreds of thousands of production deployments worldwide. It can almost certainly do the job and JSS has the flexibility to create highly complex report deigns. However, we found the learning curve for JSS to be the steepest of the three report designers we looked at.

We believe that if printed report output is required and important, that JasperReports is likely to be the best choice. Also, if the functionality provided by an open-source report server is needed, Jaspersoft and Pentaho will both trump BIRT. However, for the typical, average complexity report development project that does not require a report server, we believe that BIRT is likely to be more usable and able to produce more types of reports without resorting to custom code.